Although not a specific "feature" of MoneyWorks, webhooks (i.e. initiating a scripted action in MoneyWorks via a URL) can be easily implemented using a special custom report. This relies on three other MoneyWorks features:

To embed a script in a report, just add a custom control to the report, set it to be a script, and enter your script (it is better to test the script separately in the script editor then paste the working script in).

In the example below we have a script "myHooks" with two handlers, "add" and "cubicvolume".

In the report itself, we can call a script handler by, for example, =myhooks:add(3,4).

The report, which we have called "~hook", could be as follows: 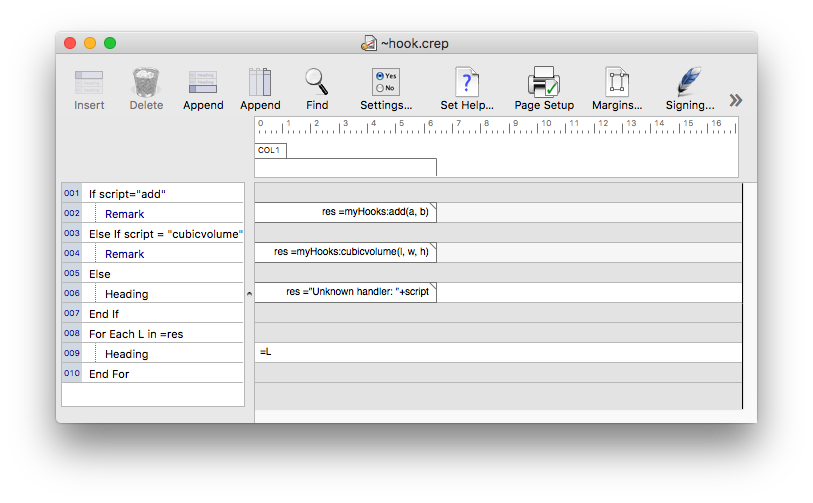 There is a variable script to specify the handler, and variables a and b for handler add, and variables l, w and h for handler cubicvolume. These variables will be instantiated automatically by the parameters that are passed in the /doreport REST call (if we also want to run the report from the user interface, the variables would need to be set up as separate custom controls).

In practice your scripts will be more capable, for example extracting all new customers today as JSON, or a list of stock movements through a particular location.

Keep in mind also that the report writer itself can do a lot of what you can do in a script in terms of number crunching and data manipulation (the scripts were in fact redundant in our trivial example). Also, to update records in MoneyWorks there is /import and /evaluate/expr=replacefield(...), and of course /export for extracting selected data.

Posted in MWScript, REST | Comments Off on MoneyWorks Webhooks